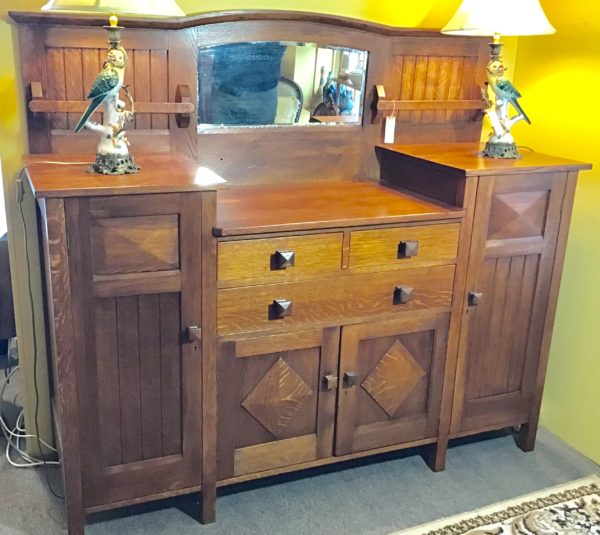 Oak sideboard made in Sydney by well respected quality manufacturers and retailers Beard Watson in the arts and crafts style popular in the early 1900’s. Clearly stamped to the top of the drawer with Beard Watson Sydney and the serial number.
The sideboard is in fully restored condition

Beard Watson & Co was renowned in Sydney as a retailer and manufacturer of high-class furnishings for the home.

The company was founded in 1889 when the furnishing business of Mark Albery & Co was taken over by partners William Henry Beard (1842-1903), James Henry Watson (1841-1934) and James Kebblewhite (1864-1930). Initially Beard Watson focused on the retail of carpets, floor coverings and furnishing fabrics from its premises at 361 George Street. However, in 1901 the company broadened its scope when it acquired the business of quality furniture manufacturer Walker, Sons and Bartholomew. Shortly after this date, it appears that William Beard and James Watson left the business.

Furniture became a central feature of Beard Watson’s business in the early decades of the 20th century, demonstrated by a series of catalogues produced in this period. A 1917 article in The Australian Manufacturer stated of Beard Watson that the “furniture it sells, and particularly the furniture it produces, is distinguished at once for its good workmanship and for its artistic beauty.” At this time, the factory in the inner-Sydney suburb of Redfern employed more than 150 workers in all areas of furniture manufacture.

By the early 1920s, Beard Watson had diversified beyond furniture, floor coverings and furnishing fabrics into glassware, china, household linen and kitchenware. A 1938 gift catalogue (TC 642.7 BEA/1) reveals this large variety of stock. But unlike a number of other Sydney drapers that would eventually become department stores, selling all manner of goods, Beard Watson focused solely on home furnishings.

Beard Watson strove to maintain a high reputation in all aspects of its business. This is shown in advertisements that appeared throughout the 1920s and 30s in The Home, a prestigious magazine for the well-heeled consumer. Beard Watson also supplied furnishings for a number of artist-designed ‘modern’ rooms at the celebrated 1929 Burdekin House exhibition. An art gallery was added to the store in the 1950s and in the 1960s, Beard Watson was offering customers free expert advice from some of Sydney’s leading interior decorators.

Beard Watson was taken over by hardware retailer Nock and Kirby in 1959, but the firm continued to trade under its own name. The company opened branch stores in Wollongong, Canberra (1955), and the Sydney suburbs of Gordon (1957) and Dee Why (1963). In order to combat less than successful sales at its Sydney city store, in 1964 the fifth floor of its six-storey building was turned over to an ‘economy furniture section’ to broaden its customer base. Then in 1966, the city building was sold to insurance giant AMP with the bottom three floors leased back by Beard Watson, halving the size of the original store. Hampered by poor sales and high rents, the city store finally closed in early 1973. In May 1973, electrical and furniture retailer Sydney Wide opened its 28th branch on the site of Beard Watson’s George Street store.