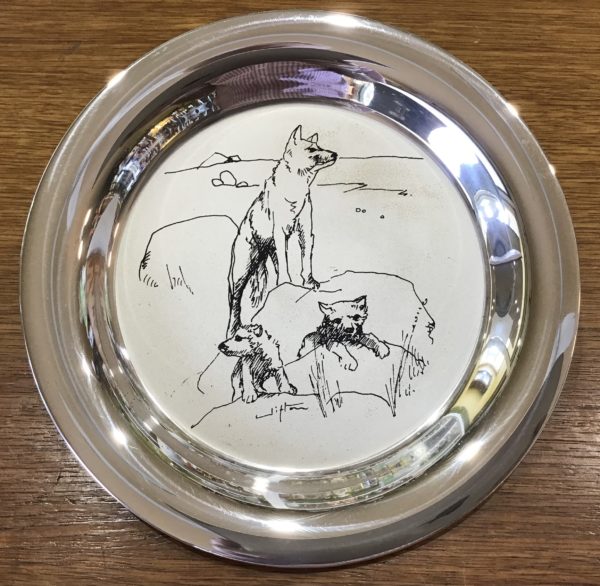 Sterling silver The Dingoes plate was specifically designed by famed Australian artist Clifton Pugh in a limited edition of 1000 plates issued in 1979.
The plate is still in its presentation box and comes with its numbered certificate of authenticity showing the plate is number 89 of 1000 and is signed by the artist Clifton Pugh.

Working as a junior in a newspaper office and at an aircraft factory, Pugh took evening classes in cartoon drawing at Swinburne Technical College in 1940. In 1942 he attended evening classes in life-drawing at the Australian School of Arts and Crafts, Adelaide, marking the beginning of a sustained interest in working from the model.

Pugh was conscripted into the Citizen Military Forces on 10 February 1943 and transferred to the Australian Imperial Force in April. After training in New South Wales and Queensland, he served in New Guinea in 1944-45 with the 2/2nd Battalion and in Japan in 1946-47 at the headquarters of the 34th Brigade. He was discharged in May 1947.

On 20 September 1947 Pugh married June Heather Rogasch, a stenographer, in the Church of Christ, Camberwell, Melbourne. They separated two years later. He attended the National Gallery School of Victoria (1948-52) under the Commonwealth Reconstruction Training Scheme. The dark hue of Pugh’s oeuvre can be traced to the palette of his teacher, the Meldrum School portraitist (Sir) William Dargie.

In the 1950s Pugh first came to notice with depictions of indigenous flora and fauna in an interpretive, figurative style. His bush scenes struck a dramatic contrast, particularly with those of the Heidelberg School, for their denial of the sentimental in favour of harsh realism. His landscapes were innovative for their employment of a relatively loose brushstroke and layering of paint that imitated the disordered character of the Australian bush. A typical work is ‘Meeting of the Apostle Birds’ (1958), in which birds of the Cottles Bridge area, north-east of Melbourne, where he spent his adult life, are arranged in an artificial pattern over the detritus of the bush floor. In ‘A Feral Cat’ (1957) the introduced animal dominates the composition, emphasising its threat to native fauna.

Pugh held his first major one-man show in March 1957 at the Victorian Artists’ Society. He became a vocal member of the Antipodeans, a group established in 1959 to defend figurative art. Other members were his artist friends, John Brack, Bob Dickerson, Arthur Boyd, David Boyd, Charles Blackman, John Perceval, and the art historian, Bernard Smith. Their exhibition at the VAS in August 1959 inspired several later reconstructions of the original show. Pugh received leading coverage in British newspapers in an exhibition of prominent Australian artists at the Whitechapel Gallery in London in 1961. He married Marlene Lorraine Harvey, ceramicist and naturalist, his de facto wife of seventeen years and mother of his two sons, Shane and Dailan, at the Registrar-General’s Office, Sydney on 23 June 1965. They were separated shortly afterwards.

Pugh was an Archibald prize winner: Rupert Henderson (1965), Sir John McEwen (1971) and Gough Whitlam (1972). Other portrait subjects ranged from his family to Australian political leaders and Prince Philip, the Duke of Edinburgh. He married his second de facto wife (1970-80) Judith Ley, a writer who had changed her name to Pugh six years earlier, at the Kensington Registry Office, London, on 29 June 1976, with former prime minister Gough Whitlam attending as a witness. Adriane Strampp, who was to become an artist in her own right, was his de facto wife from 1980 to 1985.